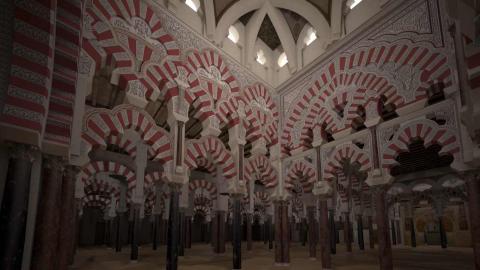 Tweet
iOS / Android. If app not installed, leads to store:
Discover it within the VirTimePlace app
VTP ID:
1
Mecenas rating:
0
No votes yet

Mosque of Cordoba in the Xth century.

With this VirTimePlace you will be able to walk around the ancient mosque of Cordoba, just with 11 galleries after the Alhaken-II extension.

This was the one who brought the greatest ornamentation, adding the Mihrab and the chapel of Villaviciosa, which are both very well preserved today, but with some transformations after the Christian reconquest, as you can see explicitly if you use your app on the place.

The most spectacular of this recreation is to go to the prayer's galleries across the arches of the courtyard, which are closed today, and see the forest of columns as Al-Hakam II saw it.

A few years later, Almanzor, built another 8 galleries, conforming the current plant of 19.

This VirTimePlace just shows the Great Mosque of Cordoba. We are currently working on a project for the tenth century Muslim town of Córdoba, where this VirTimePlace will be included.

Conducted by the VirTimePlace team.